Take A Moment of Reflection: Facing Fear-Moving Into the Waves 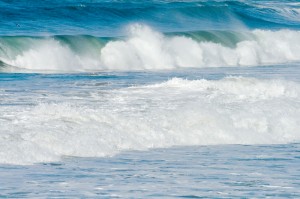 Recently, I was visiting a close friend of mine in Jacksonville, Florida who lives mere blocks from the beach. I decided to get up early in the morning to go for a bracing swim. Typically, when I go to a beach with waves, I love to get out beyond the breakers where the water is relatively calm, and simply allow the waves to pick me up and put me down as they move by on their way to break closer to the shore. Here, however, there seemed to be more than one set of breakers and getting out beyond the breaker would require going fairly far out.

I found it daunting. What if I get caught just as a large wave is breaking and get pushed under water? I have had the experience at beaches in the New York City area of being violently pushed under water, and flipped upside down to the point that I wasn’t sure which end was up, all the while feeling the weight and strength of the water on top of me. This was not something I was looking forward to experiencing again. In short, I was scared. However, I decided that, as in other situations in which I am confronted with the unknown and it feels scary, the only thing to do is face it head on – in this case, literally. So, I walked out into the water.

I found my experience of dealing with these waves to be like a metaphor for dealing with life itself. In life, there are always new changes (waves) coming toward us. If we want to live fully, we have to find ways to meet these changes head on, facing our fears in the process. Meeting change and fear head on does not, however, mean walking forward thoughtlessly into any situation that is scary (and possibly quite dangerous); it does not mean acting recklessly without care. Fear has a place in keeping us safe. Instead of avoiding the unknown and the scary altogether, however, I could cautiously test it out to see whether or not it was really dangerous and, if so, to what degree.

So, that is what I did. I experimented. The first set of breakers came to about thigh level. No danger there. I could keep going. The next set was about 15 feet beyond them. I walked out further to meet them. There was no lifeguard on duty and getting beyond the second set of breakers would have required that I go much farther into the ocean than I am used to. So while I was willing to move out beyond the first set of breakers and meet the second set head on, I was not about to go past them into deeper water, where I know there are undertows, and risk get carried out to sea.

As I approached the second set of breakers and my fear, I found it wouldn’t make sense to resist or fight them. For example, if I were to stand tensely and rigidly in place resisting the power of the water moving against me as the waves broke, I could risk injuring my back since the force of the water is stronger than I am. So, as the breaking waves approached, instead of resisting them, I jumped up and allowed them to lift me up and push me toward the shore. I found that the water’s force dissipated if I moved with it instead of standing up against it. The only thing I really had to do was keep my head above the swirling water.

I realized it also helped to have an open, playful attitude. The sea is dangerous and I needed to respect its power. However, strong and powerful as they are, I could nonetheless look at the waves as friendly forces that were playing with me, rather than deadly adversaries trying to hurt me. That enabled me to relax and allow myself to be moved by the motion of the water and, enjoy myself in the process. I was there to have fun, remember? I had to keep in mind that just because something or someone is moving against me, it doesn’t mean they are intending to cause me harm. I didn’t have to avoid the waves and I didn’t have to conquer, control or fight them either. All I had to do was engage and play with them and keep my head above water in the process.

What is something you are avoiding or fighting because of fear? What would it take for you to engage, keep your head above water, and enjoy the ride? If you are interested in exploring ways to feel empowered and confidently face your fears, click here.