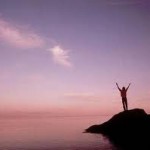 About a year ago, I decided to try to live my life similar to the way improv actors practice their art. In improv, this means saying “yes and” – never disagreeing with your fellow actor and instead accepting their ideas and adding to them.

I wish I could say I have lived the last year without ever saying no or being judgmental, but that would be a lie. I have, however, allowed myself to be open to many more opportunities, experiences, people and viewpoints than I would otherwise have and, practice makes perfect, so I‘m going to keep practicing.

Despite being really rusty, having not danced in years, I decided to take up salsa dancing again and dance in public even if I might look way less flawless and graceful than the wonderful dancers in the room. I discovered I can have great fun even while making lots of mistakes.

Probably the biggest thing I‘ve said “yes” to recently is to write the memoir that has been bubbling inside of me for years that I have been too scared to write. I won‘t pretend the process wasn‘t painful – it was. I won‘t tell you it was easy – it wasn‘t. I won‘t say that it‘s no longer scary at all – it still is. I will tell you that it was one of the most positively transformative experiences in my life and that I am not the same person having written the book as I was when I started it. I‘m about to send it to an editor but I‘ll keep you posted.

In short, saying “yes” has led me to feel more empowered and alive and to know that I don‘t have to live small anymore.

What are you saying “no” to that you can say “yes” to – and to change your life and live large as a result?