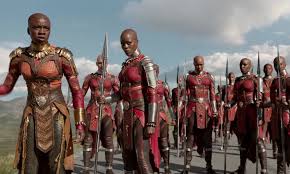 Still more learning from the Black Panther movie. Looking at the incredible, strong, and confident characters from Wakanda, one can see what is possible for groups and individuals who grow up in a society where oppression does not exist. No one is left with the unconscious feelings of inferiority and self-doubt that come hand-in-hand with being treated as inferior, and no one is left with the unearned privileges and sense of entitlement and superiority that come with being a member of a dominant group.

The women in Wakanda, in particular, are a stark contrast to the way women, and particularly Black women, are portrayed in the U.S. Rather than being second class citizens in any way, the members of the special forces group, the Dora Milaje, which consists of the nation’s strongest warriors, is made up of women only. Its general, Okoye, who heads not only this elite group but the entire nation’s armed forces and intel, is a woman.

Another member of the Dora Milaje is Nakia, the Black Panther’s on-again, off-again girlfriend, who serves as a spy posted outside the country. While the women of the Dora Milaje protect the throne through martial arts, Princess Shuri, a young woman and sister of King T’Challa, protects and serves the nation with her capacity to create technology of all kinds.

What each of these women share, and demonstrate, is self-confidence and independence. Also striking is the capacity of the men of Wakanda to work with and love these strong, intelligent, independent women without feeling a threat to their masculinity.

What might our country look like if all children were brought up to believe in themselves and if all voices were heard?