Birds and Bees and Assumptions Part 3 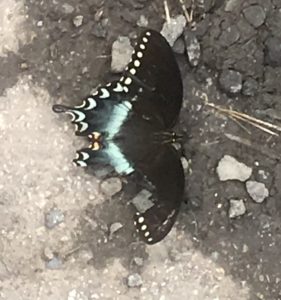 In Part 1 and Part 2 of my Birds and Bees and Assumptions Series, I wrote about experiences involving birds.  This post involves a butterfly and the incident occurred the same day as the one I described in Part 1. In that instance, I watched a fledgling bird fly off onto a branch. Soon after, I walked over to a nearby water fountain. As I approached, I saw a beautiful butterfly flying nearby. It had black wings with light blue stripes and white dots. As I stopped to watch it, it began to circle around me.

I’ve never had that happen before so I stood still to see if it would continue. As I stood there, a jogger ran by without noticing me or the butterfly. A variety of thoughts started popping into my mind: Were the butterfly’s actions Nature’s way of thanking me for taking the fledgling bird back to safety?  …. Then, a few people came by to use the water fountain and included them in its flight. So, probably not.

Was it trying to shoo me away to protect something?  … I couldn’t see anything that it might be protecting, and wouldn’t it have flown toward me to make me move away rather than circle and keep me in place? So, probably not.

Then, I noticed that one of its wings had a chunk missing. I was surprised that it was able to fly at all. Was Nature trying to tell me that beings are strong despite their injuries?  Was it trying to tell me not to make assumptions about disability? Maybe.

Finally, it landed nearby. I was able to approach within one foot without it immediately flying off.  Maybe Nature’s message was to have me just sit quietly and calmly and consider how important it is to hold our assumptions lightly.