Birds and Bees and Assumptions – Part 2 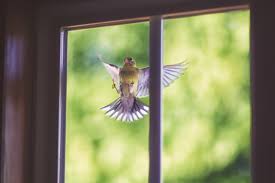 In my last post, Birds and Bees and Assumptions, I talked about how providing what we see as “help” may actually be creating a hindrance. In this post, I want to talk about assumptions.

I was walking down the street and heard a tapping noise. I looked up and saw a small bird repeatedly collide with the glass of a closed window. The bird, who had no concept of glass or windows, believed there was empty space in front of it. It continued to hold this belief as reality despite coming up against an obstacle each time it tried to enter the “space.” Instead of altering its own behavior, it focused more on increasing the rapidness and force of its forward movement. I didn’t stay to see the final outcome but imagined that the bird would lose a lot of energy, or possibly hurt itself, if it continued its futile efforts.

How many times do we continue to believe something is real even when we receive information to the contrary? Instead of changing what we belief, we either change what we see to conform to what we believe or deny the reality that we are experiencing.

I have had clients who repeatedly complained about their team members not performing up to standard. Instead of reflecting on their own assumptions or behavior, like the bird, they continued to repeat what they were doing to no avail. Through working with these clients, they were able to stop, slow down, and look at how their own assumptions and mindset might be impacting the situation – e.g., assuming that they had provided their direct reports with clear instruction/expectations.

How many times have you drained and exhausted yourself by denying what is staring you in the face because it is counter to the assumptions you hold? Where in life are you banging up against a glass window and need to re-examine your current strategy?